Home » About Us » School History

At the beginning of the 19th century, there was no formal education system in Ireland and the only education available to Catholic children was in ‘Hedge schools’. In 1831 the (British) Government introduced the National Education System in Ireland and the National School Board decided to establish a school for the 1101 inhabitants of Harold’s Cross. A National School was opened in the old Catholic Chapel beside to Mount Jerome. It cost £94 to convert the chapel into a school and a further £20 to buy desks, books etc. 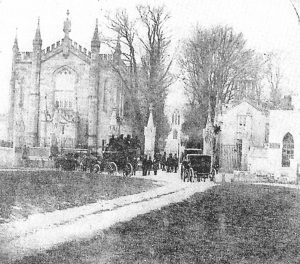 1860s: the entrance to Mount Jerome. The National School is on the far right.

The school operated Monday to Friday from 9.30 a.m. to 3.30 p.m. and the pupils (all boys) paid a penny a week if they could afford it (only about a quarter of the pupils paid). The first Principal (and teacher) of Harold’s Cross National School was Michael Crosbie who was paid £10 per year. The school rolls showed that of the 120 students registered approximately 100 attended school regularly.

In 1878 the school building was demolished and rebuilt for £336, with extensions in 1886 and 1907. However the building was considered inadequate and overcrowding was a persistent problem despite low attendance. An average of 92 of the 224 students attended school each day to be taught by two teachers.

There was originally a girl’s section of Harold’s Cross National School but it transferred to St. Clare’s Convent in 1840. The school operated Monday to Friday 10.00 a.m. to 3.00 p.m. and, again, some of the students paid a penny a week.

In order to increase teacher’s salaries, Result Exams were introduced by the Government to be held every year. Teachers were paid according to their students results in Reading, Writing, Arithmetic (Maths), Spelling, Grammar, Geography, Music, Drawing, Algebra, Geometry and Measurement for every class (except Infants).

When Harold’s Cross became a separate Catholic Parish in 1935, the decision was made to build a new National School in Clareville Road. The school was built to accommodate boys and girls with separate sections for each and a shared hall. The school opened in 1937. By 1988, the boys and girls had combined into the boy’s section, leaving the girl’s section empty for several years. It was acquired in 1993 by Scoil Mológa as a mixed all-Irish Primary School.

The school building in 2004 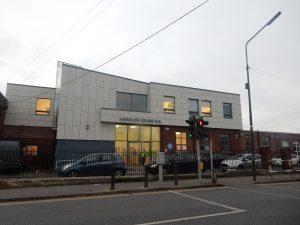 The school facade in 2017 before our most recent extension. 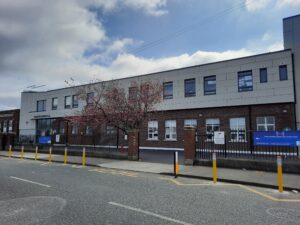